The origins of advertising can be traced back to newspaper advertising in the 19th century. Since then, the industry has experienced many changes. It has adapted to new technology and changing audience demands to remain relevant and effective.

Now, we are experiencing another wave of progressive technology and it’s presenting new marketing opportunities and raising new questions.

Enter augmented reality (AR). A medium which offers fresh ways to engage and make an impact.

To celebrate the launch of M&M’S Caramel, M&M’S brought a whole new flavor of fun to New York’s Times Square by transforming the area’s iconic billboards into an innovative AR gaming experience, May 11, 2017, in New York.
JASON DECROW/INVISION FOR M&M’S/AP IMAGES

AR has few rules and almost no boundaries, but also unique challenges. 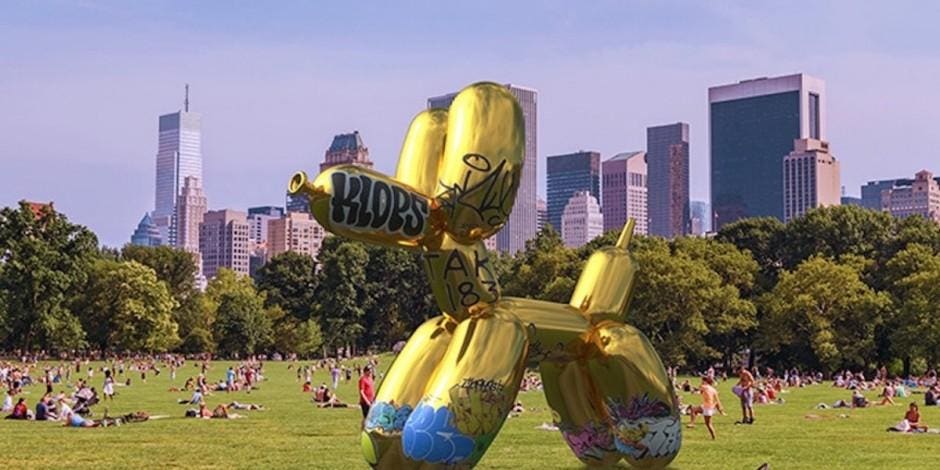 A New York-based artist, Sebastian Errazuriz, “graffiti-bombed” Jeff Koon’s AR Balloon Dog to protest against large corporations doing what they want in AR. “It all seems fun, but I believe it is imperative we start questioning how much of our virtual public space we are willing to give to companies,” Mr. Errazuriz wrote on Instagram. His work was placed in the same geotagged location in Central Park as the Snapchat version.
SEBASTIAN ERRAZURIZ

As it stands, there is no centralized body for governing the virtual/digital space. But, does it matter?

Currently, we are not all plugged into a universal digital layer that is serving everyone the same digital overlays to the real world. Instead, we have to download an app or click a link to be able to see what others are seeing, or what advertisers want us to see.

AR is under the user’s control. Therefore, the incentive or reward needs to be strong enough to entice consumers to make the effort to interact with the AR. But, once someone has opted-in, the impact is profound. The immersion and interactivity of the experience, or advert, creates an emotional connection with users which aids better recall, positive associations and increases brand awareness. What is stored, or encoded into memory, is 70% higher for AR experiences. These invitations to interact, allow consumers to connect with brands they love in a new way—AR should be heralded for this.

Brands are already playing in this new digital space—look at Burger King. Seeing dwindling use of its mobile app in Brazil, Burger King decided to piggy-back onto the marketing budget of its main competitor in order to promote its own menu. Using the Burger King app, users could point their camera at a McDonald’s advert and “burn” it, revealing a voucher for a free Whopper underneath. The feature became a viral sensation, recently winning a Cannes Lion.

‘Technology as a means to provide the best customer experience is one of our main investment targets in 2019‘, says Ariel Grunkraut, Burger King’s marketing and sales director for Brazil.
BURGER KING

The fact AR advertising can’t be forced upon us will certainly ensure it fares well. Indeed, augmented reality advertising is already outperforming other channels with conversion rates in the 20-80% range.

Off the back of the success of the channel, companies are springing up to monetize AR. Darabase is a platform that allows retailers and property owners to control and monetize AR content on their location through “GeoAR,” is building the world’s first permission Ad Network for location-based augmented reality.

All the ingredients are there for AR advertising to become huge. However, until we are all wearing mixed reality devices for the majority of our day, and we are all in a shared digital space, it can’t move beyond a marketing ploy aimed at small audiences.

Off the back of the Burger King stunt, I can see a flurry of activity in this space—brands trying to outdo each other in a game of AR trump. But, I don’t see AR advertising replacing digital OOH, TV or even print ads anytime soon—the infrastructure just isn’t there yet.

This article was written by Sol Rogers and originally appeared on Forbes.com.

To read about the top VR headsets check out the top 8 headsets here: Recent VR, AR, and MR News – Eight Headsets You Need To Know About

If you have a VR project you’re working on check out our VR Services to see if we can help.

2020 is off to a good start with positive headlines about Virtual Reality. Here are just some of the announcements.

Within the past five years, the number of U.S adults and children practicing the mindfulness exercise has greatly increased. Now, we can add an extra dimension to meditation through VR.

The Return To Work, Technology, And Some Future Gazing

What will the office and returning to work be like in the future? Advances in technology mean you may not even have an office to return to…

Neurable has announced a $6 million Series A round of funding to move beyond VR applications and develop the everyday brain-computer interface.

Political parties now spend more on online advertising than traditional channels, with widespread political activity taking place on social media sites such as Twitter and Facebook. As technology and forms of communication evolve, could we see virtual reality offering a new edge over the competition?

What’s Hot In 2020 —Immersive Developments To Watch Out For

As we say goodbye to a fantastic year—and a decade that has seen so many technological advances—we can look forward to 2020 and all it holds for VR, AR, and MR. Here are just some of the developments and releases we’re excited about…

When you work in an industry that is moving at lightning speed, it’s often hard to take a step back and reflect. So, as we wind down for the Christmas break, we thought we’d do just that!

The Top 10 Immersive Developments of 2019

It’s fair to say that 2019 has been a year full of progress for augmented reality (AR), virtual reality (VR), and mixed reality (MR). For those working in the industry, there have been many developments which lay the foundation for positive growth.

How Technology Is Augmenting Traditional Theatre

While theatre has been using all sorts of effects—from lighting to sound—for hundreds of years to make the experience more immersive for the audience, new pioneering technologies offer a unique way of adding an extra dimension to performances.  The theatre industry is experimenting with immersive technologies, including virtual reality (VR), augmented reality (AR) and mixed […]

This site uses cookies, if you do not accept please stop using our site immediately. Find out more here.